IT’S NOT LOCAL UNLESS IT’S YONKERS VOICE!!!
Date: 10/16/18
Where: Yonkers, NY
DEBATE CANCELED: Joe Joseph Pinion III Picked A Date, Approved A Venue And Challenged Nader Sayegh To A 90th Assembly District Debate To Be Broadcast Live
CHALLENGE ACCEPTED: Nader Nader J. Sayegh Agreed To The Debate That Was To Be Held Tonight, But Unfortunately Joe Pinion Could Not Come To The Debate He Asked For, Because Of Other Commitments.
SHOW UP AND SPEAK: It Was Agreed By Both Candidates That If One Candidate Did Not Show Up For The Pre-Arranged Debate, That The Other Candidate Would Exclusively Have The Time On Camera
BIG INTERVIEW: Nader Sayegh said it was not necessary to go to the debate venue and invited video Journalist Ru Ros to sit down with him in his office
SHOCKING REVELATION: Nader Sayegh disclosed that the Yonkers Public Schools are facing an $86 Million deficit on top of the City of Yonkers Double Digit Deficit in 2019 meaning the schools are going to be in worse financial shape next year.
INTERVIEW HIGHLIGHTS: Nader J. Sayegh has decades of service as a teacher, principal, president of the Board of Education, and other community organizations
60 year old Nader Sayegh is a product of the Yonkers Public Schools, and his children were educated in the schools too.
Nader J. Sayeghis a local attorney and an advocate for education funding, tax relief, and quality-of-life issues in Yonkers.
Nader J. Sayegh says Yonkers Raceway and Empire Casino, which is in the process of being sold to MGM should include negotiations to increase in the revenues that go to Yonkers.
Nader J. Sayegh believes the city should get more from developers who are pouring into Yonkers.
Nader J. Sayegh says that he is qualified candidate with a long history in Yonkers, and hands-on experience at every level.
Nader Sayegh is a former member of the Yonkers Federation of Teachers and the Yonkers Council of Administrators
2018-10-17
YV_Admin
Share 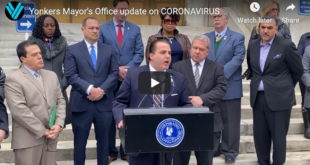 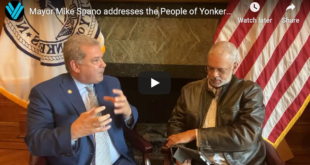 Mayor Mike Spano Addresses The CoronaVirus Situation in our Area